This is Debbie. She had neglected her health and one day looked in the mirror and said enough was enough. When she came to us she had plenty of decay, and some teeth which could not be saved. Her desire to change how well she looked and felt about herself allowed us to be able to remove the bad teeth, re-establish a good level of hygiene and be able to replace the damaged, decayed teeth with permanent teeth. Her self-esteem and demeanor improved almost instantly.

Cindy was concerned that her smile was getting smaller as she knew she was grinding her teeth at night. The years had taken a toll and she also noticed wrinkles beginning at the corners of her mouth. We were able to improve her smile and self-confidence.

Amber had spent two years in orthodontics and because of the size of her teeth, which were small, and the jaws, which were large, the orthodontist could not bring the teeth together to eliminate the spaces. A combination of crowns and veneers contributed to her final success.

Candy was very depressed, looking at her teeth, and wanted to have a pretty smile again. She chose a Snap On Smile to help her through the transition process of getting her smile back. She is able to wear the Snap On Smile to work and likes how it makes her feel.

David is a manager in a large corporation and has a family history of bad teeth. He too wanted to improve his appearance to improve his job position. He selected a Snap On Smile to help him through the period of time in which he is having the smile he wants created.

Laurie had long ago given up the thought of having “pretty teeth.” After she got married the thought of any dental treatment was out of the question as kids came along. One day she decided to see what could be done and came into our office. We treated her top and bottom teeth and she received dental implants in addition to other various cosmetic and restorative treatments. You can see what a difference a beautiful smile can have a person! Laurie now loves showing off her smile to the world.

Check out our services and give us a call to see what our cutting edge technology and cutting edge care can do for you. 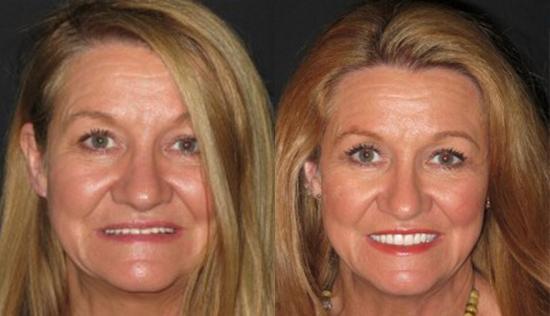 Check out our services and give us a call to see what our cutting edge technology and cutting edge care can do for you.

Chao Pinhole Gum Rejuvenation is a technique used by Dr. Barden, DDS to eliminate the “long in the tooth” look, as well as sensitivity, caused by gum recession. These are before and after pictures of a patient who was experiencing sensitivity to hot and cold on her lower teeth. The first picture was taken right before Dr. Barden used the Chao Pinhole Rejuvenation Technique, and the second picture was taken eight days after the procedure. The patient has informed Dr. Barden that she no longer experiences the sensitivity to hot and cold, and she is thrilled with the results.

Shown above, these are before and after pictures of a different patient. The photos were taken right before the procedure, as well as four weeks after Dr. Barden used the Chao Pinhole Surgical Technique®™.